If you’d asked me a few months ago if I liked historical fiction, I think I would have said no. Fast forward to The Great Alone, Lilac Girls, Where the Crawdads Sing, American Princess, to name a few, and I think it’s safe to say I like historical fiction.

I recently had the chance to read the follow-up story to Moloka’i by Alan Brennert, called Daughter of Moloka’i. If you haven’t gotten to read Moloka’i yet, I’ll stop you now and suggest grabbing a copy to savor before you read my review (or the sequel)! Daughter of Moloka’i is out 2/19/19. 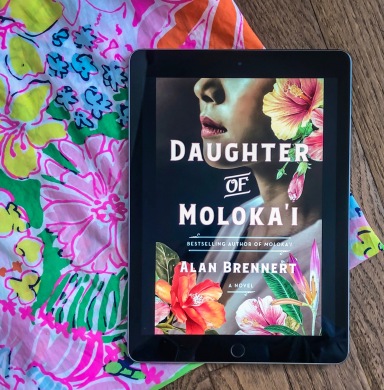 I can’t imagine a better ending to the beautiful saga of Rachel Kalama and her life after leaving Moloka’i. Rachel is forced to give up her daughter shortly after she is born, due to the contagious nature of leprosy and the lack of knowledge surrounding how the disease is spread.

Her daughter, Ruth, is brought up in an orphanage until she is 5 years old. Ruth longs for a home, but is constantly stuck between two worlds- being Japanese and being Hawaiian. She is finally adopted by a loving, Japanese family with two sons, and they begin a new life together in California. Life is not always perfect for Ruth and her new family. Shortly after arriving in California, the Japanese bomb Pearl Harbor and Japanese-Americans are rounded up and sent to internment camps.

My uncle is a third generation Japanese-American, and his parents were forced into an internment camp similar to the one Ruth and her family lived in. This story brought to life the struggle that my uncle’s family had to endure, and is an important lesson to those who were unfamiliar with this horrible scar on our nation’s history.

In a devastatingly beautiful story, we learn more about Ruth and her family’s life interned, as well as the road that eventually brings her back to

Rachel. I cannot put into words just how much I loved this book.

Thank you to St. Martin’s Press and Netgalley for the exciting opportunity to read this highly anticipated read early!

Have you read Moloka’i? Are you an unwitting lover of historical fiction like me? Let me know in the comments below!

so so so incredibly excited to read this book! after The Broken Girls, Simone St. James has become an auto-read for me, in the same way as Diane Chamberlain, Susan Meissner, Jodi Picoult and Riley Sager. ⠀ ⠀ shout out to @copper_boom_ for ordering this as her @bookofthemonth, racing through it and passing it on.... a birthday gift that gives back 🥳 now back to my deliberately-scheduled evening agenda of no plans but reading this book 🤓
it’s 8:30 am on a Wednesday, but it’s gotta be 4:00 on a Friday somewhere, right?⠀ ⠀ send help and coffee 😂 #illinoiscraftbeer
blizzards + aggressive itineraries = all the beers 🍻
I'm still trying to come up with the words to summarize how I felt about this book. American Dirt was the first book I read in 2020, and I'm slightly worried that I will not read a book better than this the entire year. I read this from the comfort of my home, where I am always safe, warm, fed and clothed. I don't fear for my safety or the safety of my loved ones. This truth that I live every day is so vastly different from what the main character and her son face, and what many VERY REAL people experience every single day. This ought to be a must-read once it’s out 1/21!
this. on repeat.
this picture was taken in the middle of some really rough times for us, but serves as a great reminder that you can find something to smile about every single day, and there IS light at the end of the tunnel. ⠀ ⠀ Interestingly there is also light IN the tunnel, and the tunnel leads to a bar, but I’m not here for metaphor accuracy. sending positive thoughts and good vibes for 2020 and beyond 🌦